Finnaly my first Hot Toys has been arrived!... My hard work finally paid off this toy hunt, although I bought it the price is quite expensive but I am not sorry because this is really Hot (Hot=Sexy) and it is really really Hot Toys.
Chris Redfield, maybe if you hear that name who comes to my mind was the main hero from Resident Evil Game! if I flashback to 14 years ago that I remember Chris Redfield has been one of the main hero in the game Resident Evil since 14 years ago. do not be surprised if he always exist appear in every game Resident Evil poster. Although I myself had no one completed it game but one of my favorite Resident Evil games are Resident Evil 1: director's cut where he was trapped in the gigantic luxury mansion and survive from Zombies.
her face has changed since it first appeared, and until now he's really like Taylor Lautner who transformed in the movie Twilight Saga: New Moon. Now he's a sexy guy probably because too many steroids because Zombie slaying :-)
DETAIL
Head, This Figure was sculpted by Kang In Ae, Not Bad. Detailing sculpt is awesome, the lips, eyes, and nose like a life human but to sculpt hair always very difficult thing to implies in action figures. I very rarely to find action figures with 100% perfect hair sculpt. 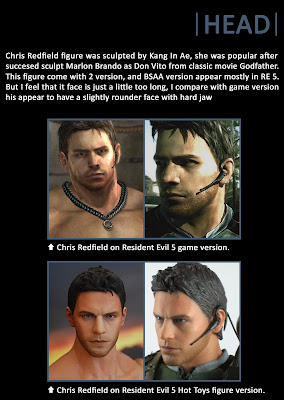 And I think that face is feel too long, I compare with game version his appear to haveslightlyrounder face with hard jaw. But it make this Toy look more handsome, although will slightly different from the game version. If you do not realize this difference you need to look at this with an ultra critical eye to pick up on the ever so slight discrepancies.
PROPORTION
Body, okay there is no doubt that Hot Toys is using the same body as Arnold Schwarzenegger as Mayor Alan "Dutch" Scaefer (from The Predator). The good news about using this body is the rubber was cut at the shoulder to give it more freedom to move up and down and the vein on it his arms are really add life effect. The only bad thing that I'm dissapointed with his nipples, I think it just slightly too down. LOL.... And then the sexy muscle body is perfect if you ask me, But I read in www.superheroesbase.com there stated that his clothes dye will sully his body just like a bruise, and it happened with author's Jack Krauser figure, this statemen make me very sad. I can't check it because I'm always never opened my figure from the box, I'm mint in box collector. And the author stated it was written on instruction leaflet. 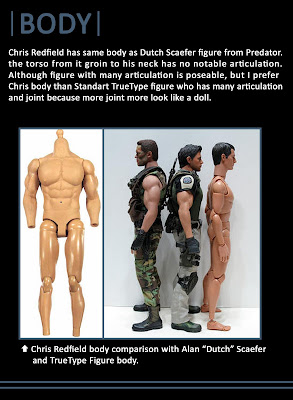 That body comparison with Alan "Dutch" Scaefer and TrueType figure body. Although had a same body but I don't know why Chris Redfield look slightly shorter than Alan "Dutch' Scaefer, perhabs because Alan wearing high heels at the time of photoshoot. 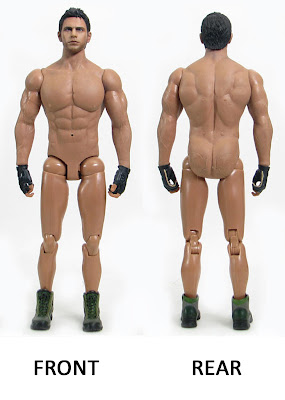 Articulations, the rubber skin is going to limit the movement, Yes! that's true . The muscle also will make you scared to move the hand because you can’t see what position the skeleton frame is inside the rubber skin. So you have to be extra careful about that. Also the neck, it’s just too fat that you can’t move his head downward at all. As for the wrists Hot Toys provided 2 extra joints, it’s good to know they think about that.

Painting, I don’t have any complain with this toy I love the paint job they did. JC Hong never dissapointed me, especially the head shading and skin tones. He do great job for weapons and accessories too. The tones show nice subtle variations, with a slight darkening around the eyes and on the stubble shadowing on his chin. The lips are picked out in a convincing tone and the eyes are up there with some of his best work, it really make the head-sculpt looks alive. If you don’t want the body become bruises, let the plastics on his arms where they are, it should be fine I guess. JC add weathering and rusty effect to all weapons and it make this toys look perfect. 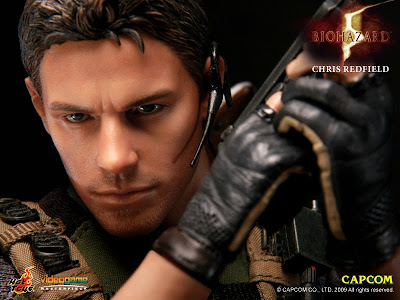 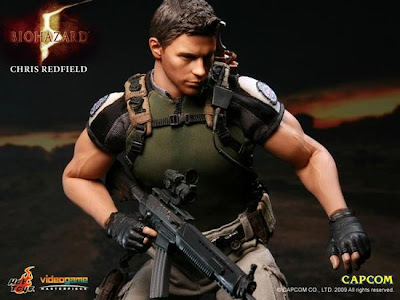 Photo above are some photos of a prototype from Hot Toys Chris Redfield BSAA, I download from Google.

Chris comes with a very imposing weapon, Hot Toys are very Expert to create weapon with perfectly detail. This Figure contain 21 piece accesories 13 of them are weapon. 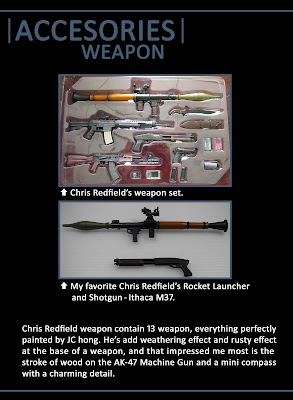 Outfit, Chris Redfield BSAA comes with :
I read in www.mwctoys.com this outfit was produced by Polland, no not the country, that only has one ‘L’. I’m not even sure if Polland is a person or a collective, but whatever he/she/they are, they’ve done a great job of replicating the outfit as seen in the game. If you literally hold up your figure next to the full figure image I linked to above (which is just a little over 1/6th scale in height) you’ll see how amazingly well observed his fatigues are. Every detail from the different coloured panels on his shirt with embroidered patches through to the elaborate webbing harness with it’s numerous pouches and pockets, all of which have opening clips and Velcroed flaps are replicated just about as perfectly as its possible at this scale.

Okay, That's my review from my new toy, Hot Toys Chris Redfield (BSAA version). don't forget to visit my blog to find my other toys review.

Photo of the month 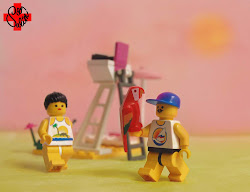